Hey guys..
I've just been looking around the net at different ants and i come across some pics of Rhytidoponera metallica and i thought they looked a really nice ant.. so i thought id come do some research here.. however i only found 2 threads.. by the same block.. askin for help lol..
Whats up with no1 saying anything about them??? Are they like MEGA difficult to keep or somat??
Any info would be appreciated.

Sorry guys but i do think they look stunning :D 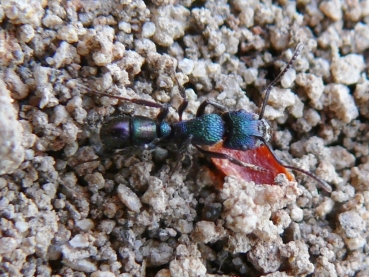 All what I know about them is : they live in Australia and they are nice coloured , <1cm of size.

Yes: Rhytidoponera metallica is self ant who is green, with Oecophylla smaradigna.

As for as i know they are not easy to keep. But in deed they are very nice.

I just found this forum a few days ago after a friend of mine sent me a photo he took with his new super duper camera of a larger one inch bullant he found which he now has taken on as a "pet" for his kids. Knowing I was a bit of an ant freak as a kid (studied them and had antfarms etc) he asked me for advice on what to feed it and how long they can be expected to live.

I found myslef searching the web for definitive answers and found this website. Browsing the forums, I got a shock when I just happened to see the title of this thread.

Well, Rhytidoponera metallica just happen to be the very ant species I used in all of my ant farms as a kid so I guess I may have had more experience with them than anyone here who has posted so far. I never really knew the actual name of this ant till much later in life when I went to university and did some research.

I had always been facinated with ants and there were about four species that lived in my backyard as a kid in Melbourne, Australia. The Argentine Ant (yellow, small, intoduced, aggressive, well armed mandibles, with big headed/jawed soldier variants), the common black ant (smallest of the lot, not very agressive but tenacious in numbers, small mandibles, squirts formic acid from abdomen), the "Fire Ant" like ant (not "the" fire ant of South America but a local species that was kind of like a slightly bigger Argentine Ant, black, very agressive, very strong big mandibles that can just dint the skin, sting armed and tries to use it) and finally the biggest, shyest, but well armed large mandibles and a VERY painful sting, but the least populuos ant in the backyard, the Greenhead Ant or Rhytidoponera metallica.

Rhytidoponera metallica made the obvious best choice for an ant to populate my ant farm. It was large enough, and slow enough that it was easy to hand/collect/capture without squishing it and would not escape from any crack/holess in my ant farm (it was one of those plastic ones, vetical, two transparent sheets together maybe 12" x 10", fill with sand from the bottom) . It also seemed to naturally live in smaller groups/colonies than its smaller cousins. They also seemed to be more of a "thinking" ant, in that they didn't run around in a made frenzy but seemed to deliberately patrol their terrotory calmly and methodically like policmen.

They seemed to be the ideal ant to use from my backyard.

A few thngs of note.

1) My ant farms were ALWAYS a collection of scattered "workers" i just happened to collect from this one spot in the backyard, up against the fence shared with our neighbour where they seemed to always be loitering. I NEVER really found what I would condsider the front door to their nest. I always thought it would have been on the neighbours side of the fence. I occasionally use to find what appeared to be members from another colony up the other side of the house near the garden near the driveway, but never thought them to be as reliable a source for "abducting" ants for ant farm populating puproses.

2) Ironically, of all the ants in my backyard, the one that I was most interested in, I had never did witness these ants to take flight, typically at dusk on balmy summer nights, like I had seen all the other ants did, to mate. I therefore never had achance to snare myself a fresh queen. My "dream" was to one day find a queen Rhytidoponera metallica to start my ant farm so that I could have a REAL sustainable ant farm. My ant farms would typcially be no more than perhap a dozen or so workers that, remarkably enough, seemed to settle in quite well and dig elaborate tunnels and chambers. They even piled the dead ina dead pile outside fo the colony.

3) One one occasion, after a few of not having checked up, I noticed what appeared to be an egg/coccon in the ant farm. I couldn't believe it. How coudl this be so? Maybe there was a worm in the sand that I used and it had cocconed itself or something. Turns out a few days later, the cocoon was gone and a WINGED ant had appeared in one of the chambers!!!! This seemed impossble! I thought, no queen, no eggs, definitely no dornes. What had I witnessed here?

4) One day, a late summer afternoon, I noticed an ant trail running all the way from the garden near driveway all the way down the driveway ito the backyard. When I had a closer look and saw that is was my metallic freinds, I was absolutely amazed. It was the most remarkable, public and surprising thing I had ever seen them do. Why had they all of a sudden seemed to have come out of nowhere and decided to excute what seem to be a massive relocation exercise? Who old em where to go and why it was worth the trouble?

Not only was it the first ever ant trail of these shy/secretive metallic ants I had seen, let alone the biggest congreation and organisation of them, but they seemed to have been executing some kind of colony wide strategic relocation.

When I took a closer look I was even more astounded. They were physically carrying egg cocoons with them. But even more amazing was some of them were carrying what appeared to be their curled up dead sisters in their mandibles But not just carrying them "normally" in their jaws, out in front like you might expect, but in a very deliberate peculiar way. The passengers seemed to be curled up in a ball, with the mandibles of both passenger and ride locked in a mandible to mandiblel grip, so that the passenger was held high over the head and back of the ant that was carrying them. I couldn't work it out. What the heck was going on here????

I took a stick and gently proded one of these carrying combos. The curled up passenger and his ride kind of lost their balance and became disengaged. Then, to my amazement, I saw the curled up bundle that I thought was a ded ant, slowly spring to life, gain it's feet and walk off and join the rest of his mates heading north along the ant trail!!!

These were live ants that were being carried in this very peculiar but deliberate way. But why carry them in that way. Why carry them at all? What was so special about them? They all looked so vulnerable. Was this normal behaviour?

I never quite worked out what eneded up happening to these ants that I had seen. I think my dad did some major backyard renovations and ripped up a lot of the garden and concrete destroying all the regualr spots I used to see these ants. My days of keeping ant farms were coming to an end any ways. The mysteries remained but I had to move on.

Years pass and eventually I find myself studying Zoology at university and surrounded by great research material, and took it on myself one lunchtime to see if I could put a name to the ant that took up much of my interest as kid. I think I searched "metallic ant" (maybe on some primitive internet) somehow and eventually was able to find a source that confirmed the name of the ant: Rhytidoponera metallica or Greenhead ant. Finally! A name.

I did a bit more research about this ant and what I found amazed me once again. It seems most of my observations about this ant made as a 10-14 year old kid were confirmed.

In particular, had I ever been able to even access an ant colony of these ants in order to pick a queen for my ant farm, I probbaly would not have even spotted her as there is little morphological difference between workers and queen. So all along I was probably doomed to have never even be able to identify a queen of htis specicies.

Secondly, I actually find out that qeenless colonies of these ants ARE able to produce eggs, which explains that time I saw the egg/coccon and then the winged drone suddenly appear in my queenless nest.

And thirdly, I did find that the peculiar "piggy back" carrying behviour HAS been documented in some journals. I never did quite get to the bottom of it and have since forgotten where I found it documented. I am facinated to knwo the evolutionary reason for it. I hope to get that answered one day.

Anyways. Hope you enjoyed by story about my dealings with this little blighter. I never seemed to have much trouble keeping them but can't confess to ever maintaing a susatainable colony (not that I thought I ever coudl without that elusive queen).

Welcome to the forum. Thanks for sharing your experience with ut. It's just great to have an Aussie around to talk about the ants we can only dream of and read about.

What you whitnessed is social transports, ants do it. Why exactly? We might never know but it surely has some benefits for them.

And yes, in some species in absence of the queen workers are able to lay eggs. Usually they get eaten but if they do develop only drones will come out of it as the eggs are not fertilized.

Very nice info you give us here, thanks

Hi Bull Ant and thankyou.. that was a great read.. and yes i do still hope to one day own a colony of these lovely ants.

These are beautiful ants. Does anyone know if Antstore will sell them because I think alot of people would want to buy them. Maybe we should email the owner Martin S.

Most species in Australia are protected, and there are very few people with a licence to capture them, this is why pavida is so expensive when it does appear for sale

its not REALLY expensive at some ''other'' ant shop.

Do you know if they are sold somewhere else please? I am going to send the owner Martin S a private email suggesting that he gets a licence if he doesn't already have one to capture some of these ants. If enough of us email him that we are interested then maybe he'll stock them.

They will be expensive, i wont be spending allot on ants again for a lil while lol

Miszt u did spend a lot of money on those new exotic ants of urs, forgot name but those which have a 3cm sting and one of them did sting u... al i remember.
The most i spent on an ant colony was £25 (just the ants themselves)