I have always been interested in nature, especially insects, and most especially the eusocial hymenopterans. For many summers in my childhood, I sat crouched over anthills and observed wasps nests at my parents summer residence in the swedish woodlands. I was lucky, for my stepfather is a biologist and the closest neighbour had a history of farming bees - Thus, there was a lot of interesting litterature on the subject laying around, and there were cunning people around to answer my neverending mass of questions.

I always wanted to observe ants inside their nests, but that was difficult at the time. I was sure there was some way to hold ants in captivity, and I gave it a few tries, but with no success. There was a lot of litterature on beekeeping, but nothing about antkeeping - so frankly I had no idea of how to do it.

Since then I have always kept animals. Mostly fish (another great interest), but also some invertebrates - Snails, aquatic and semi-aquatic crustaceans, ant lions, diver beetles and dragon fly nymphs. The interest for social insects never died out though, but it was dormant for a decade or more, since I just couldn't figure out how to start up a colony or care for it.

I found this webpage a few months ago by sheer luck, and I started reading about antkeeping. I was surprised, since I had no idea there was actually an antkeeping community. I always thought this activity was limited to maybe a few eccentric biologists who kept laboratory nests, but when I read that there are actually people who keep tropical ant species as a hobby, and companies that import and sell queens, I decided that this was simply too good to be true.

After a lot of studies, I decided for a Myrmecocystus Mimicus colony as my first. Some may argue against this decision on the basis that I have no experience on the subject of antkeeping - and of course they might be right. In time we will see. I do, however, have a lot of experience with animal keeping in general, and I like the challenge. I see this as a chance to study a very peculiar species which I have never even seen before, and a way to adjust and fine tune my skills before I buy an acromyrmex colony.

In this thread I will write down my observations, the happenings in the colony, and the thoughts and theories that follow. For the moment, I have no camera, but as soon as possible I will also present visuals of the colony as it (hopefully) grows large.

First report - Less than a week after the delivery of the queen.

The queen, a few eggs and three or four larvae were delivered to me in a package from antsectopia this monday. They came in a tiny glass vial, seemingly healthy. The queen has a look and color similar to a Formica Rufa queen, but she has a more obviously segmented, slightly elongated abdomen, like a Lasius Niger. She seems not to care about neighter light nor light vibrations, and I have decided to keep her vial uncovered to acclimatize her to the light, so that I will not need to keep the colony in the dark later on. The temperature varies between 25 and 26 degrees celsius - Slightly higher than room temperature, but yet I have no way of measuring moisture. The moisture level seems fine in the tube though. It is partly packed with wet paper, and she moves the brood around to the place she sees most fitting for the moment, so I am not worried about that. In a few weeks I will offer her a new nesting tube so she can move if the conditions are becoming suboptimal in the current one.

The young mother tends to her tiny pile of brood almost constantly, cleaning the eggs and moving around the larvae when needed. I was worried for a few days when I could not see any progress in the development, and I constantly had to remind myself to be patient since all eventual disruptions in this stage could make the poor queen panic and consume her own young, as sometimes seem to be the case. This behaviour I have yet to observe though, despite the long journey and the undarkened nest.

I have also put a small amount of honey water and a tiny, dead fly right outside the tube if she decides to feed her young, but she has not touched the food at all. I assume she will not eat until her newly hatched firstborns collect the food for her, but you never know. It's there if she wants it.

She seems like a genuinely good mother, and I got confident in her abilites today, when I noticed that the largest of the very tiny grubs had turned into a pygmy pupae, pale white in color. Another of the larvae seem to be about the right size to pupate, so expect it to do so within the next few days.

For me, this is evidence that there is something serious going on in the tube, and that this project might actually succeed. Now I will just have to wait until the firstborn hatches before I take further action. 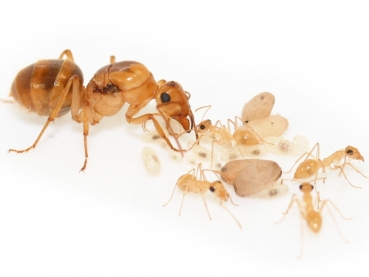 Probably dead, experience has taught me that Myrmecocystus spp. is very difficult to keep.