Hi all,
Im hoping for some help with Paraponera clavata, i recently (2 weeks ago) got a small colony from Antstore which at first seemed fine but now dont look that good.

Temperatures are around 26oC with high humidity, they had dug under some wood and were very active but now seem much (too) calm.
I lost one worker a few days ago and saw another yesterday that appeared to have lost co-ordination, difficulty in standing and twitching. I use no sprays in the room and the substrate has been used for other species with no apparent problems.

I have been feeding individual pots of honey, sugar and nectar waters but have been told to stop the honey (awaiting a reply on if this is an actual problem).

I am obviously doing something wrong and would appreciate any info from people who have kept this species, also, will this post go onto the German site or do i need to translate and post separately?)

thanks for any help offered.
Sebastian 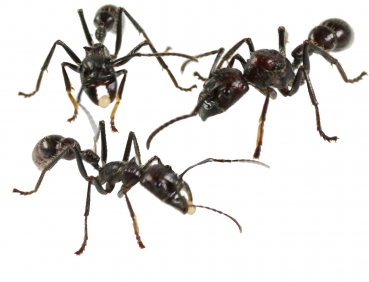 What humidty do you exactly have?
The first small workers are very sensitive and die very fast. They need a humidity around 80% or more.
Maybe they were damaged from the long jurney but maybe it is to dry.

The humidity is high (depending on time of day up to 90Rh,) as they are in a small tank within a larger tank with a mister system (this only runs during the day) and a large heated pond.

I have been trying to follow the German threads using Google translate but sometimes find the translations difficult, but one writer seems to be having possibly similar issues, loss of workers and not much activity, although he mentions the queen not laying eggs, I cant see into my nest area so dont know whats happening.

Unfortunately the queen is now dead, after seeing her staggering around I found her dead the next day. I have been in contact with a PhD student studying Dinoponera at Leeds University and asked her opinion (although a different Genus, they may have similarities?).
here is her reply.

I don't have any experience of that species specifically, but I've found with my Dinoponera colonies that worker mortality is quite high, and I've had quite a bit of trouble trying to get the colonies to a point where they are at least replacing the workers who are dying. In my species, the egg stage seems to take only a few days, and they then remain larvae for several weeks. Once they've pupated it takes another 3 - 4 weeks for the adult workers to emerge, so its quite a long turn-around from egg to worker. I've also found that they have quite a high death rate of eggs and larvae - from what I've heard the Queen will lay 1-2 eggs a day, and in my colonies that tends to translate to 3 or 4 larvae a month. As I said, I don't have any experience of working with Paraponera, but if they are similar to Dinoponera, then with such a small colony to start out with, its quite possible that the death rate simply exceeded the birth rate.

Do you know if Paraponera reproduce by fission in the wild? In Dinoponera, the Queen is not capable of raising brood on her own, and so new colonies are only ever formed by a small number of workers splitting off from a larger colony. So if your colony got down to only the Queen, that might explain why she wasn't producing any brood. (Sebastian; This does sound similar to what Randy Morgan from Cincinnati Zoo has written about).

I've found that my colonies have been very susceptible to fungal infection, and I lost a few colonies due to that last month. I had been keeping them in plaster nests but it seems this provides a perfect environment for fungus, and now I'm keeping them in plastic nest boxes instead, and they seem to be doing much better. I've also found that they need quite a bit of variety in their diet - I was initially just feeding them meal worms and the occasional bit of fruit but I found that after a while they weren't really taking the meal worms, even though their larvae were starving - I've started giving them tinned meat about once a week (they seem to really like corned beef) and since then the colonies are doing much better.

Her next question was that she hoped that my experience wouldn't put me off trying again, as i am really bad with money i expect to be taking out a bank loan soon.
Sebastian

sorry to hear about your queen, a very interesting read. I have no experience with this species but never the less i found it very informative. I hope this isn't the end and you try again. If you do please re-open this post and keep us updated.