The first thing you notice about this ant apart from its sheer beauty, is its fluffy appearance which comes from the many hairs covering its body. I bought a small colony on the 23 April 2011 containing about 40 ants which also had roughly the same ammount of larvae. They arrived in a wide mouthed plastic test tube with a cork bung in its end. I had prepared a small glass arena about 25 x 10 x 10 cm and laid the tube on the sand within. The ants came straight out and began to attack a dead blue bottle i had put in earlier.

I made a small y-tong nest for them and put it in the arena and within a few hours the whole colony had moved into it but there was no sign of the brood by the next day.

I noticed two clumps of eggs within the nest.

And with the queen.

A large solitary larvae, most have been taken into the green aquatic tube that i have exiting the nest. Unfortunatly i can't see whats happening in there, you can also just see a cocoon in the exit hole below.

The nest is a verticle y-tong with 3 chambers on the bottom and 3 at the top. It sits in a flower pot tray for water but the ants prefer to live at the top where it is drier and rarely venture to the bottom, surprising as they are from Taiwan where it is humid. What little information i can find about these is that they like humidity between 50 - 70 RH. I'm keeping them pretty cool too at about 20 - 23c . The nest is connected to a small plastic tub and only very rarely have i seen the odd ant come out to take honey and sugar water and the occassional fruit fly. The colony does seem to have grown slightly so i can only assume that the cocoons have hatched. 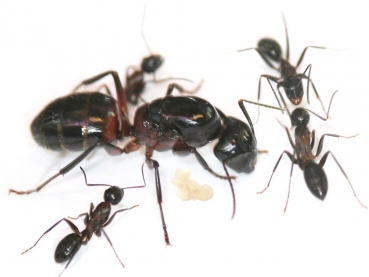 Firstly brilliant photos mate, good effort. I have some great photos of my Nigriceps colony which is growing rapidly, however I cant share them as the file is always too big, I am using an cannon SLR. I notice the detail in your pictures and wonder how you get them to load on the site?

Thx Bugsy, i use Pixresizer Hyperlinks sind nur für registrierte Nutzer sichtbar to make the files smaller but i use my own server to upload them too, and then just link them here. The file size is quite small so you could use a photo host something like photobucket to store your pics at if you can't upload them here.

I noticed a couple of newly hatched ants today which are slightly lighter in colour. One is at the top and one on the right

I'm hoping that if the numbers build up they may start to make more of an appearance in the arena. You can also see the different sizes of workers and soldiers.

Up until now i have been feeding crickets and mealworms in the arena and they have been ignoring them, but recently i have been putting them in the vent close to the nest . They act very nervously and approach their food like scared puppies but are happy to take them as soon as they realise their prey is dead and there is no threat.

Ive now changed the old arena with a new clear platic arena and the ants have been out foraging during the day, i was beginning to wonder if these were nocturnal as i had rarely seen them. The most i have seen out is only 3 small workers and never seen the larger soldiers come out, they only seem to guard inside the nest.
They have a choice of honey water and sugar water but much prefer the honey, i will probably take the sugar out. I havent seen them carry any food, ie flies or cockroaches, back to the nest but they do spend some time nibbling at the carcasses. They also seemed to enjoy cooked chicken.

Another shot from inside the nest shows younger ants being nurse maids.

Continuing to grow very slowly the ants have now moved the brood to the outlet tube between the y-tong and arena.

Ive been a bit worried about the build up of cricket and roache body parts in the nest incase of fungus or disease, so ive very slightly raised the temps in both the nest and arena. The ants have become much more active and have completely tidied up their rooms

and now have a rubbish heap. The queen continues to lay eggs and there are still plenty of larvae.

Nice to hear it Andie.

They are very beautiful ants. How did you come by them?

I recently moved them into a bigger arena and glued the y-yong nest in situ with the ants inside last week. I thought perhaps the silicon fumes may of harmed them but they all seem ok. I kept a pc fan going for 24 hours to circulate the air so perhaps that helped a bit.They have though slowed down but the temps have also dropped to about 72 f There are loads of larvae but they seem to have stopped growing ? so perhaps they are having some sort of seasonal rest.

Don't forget Camponotus generally are slower to grow. My Camponotus ligniperdus will sometimes nibble crickets in the arena, coming back when they want it. Sometimes the food i put in will never leave the basin as they seem to shuttle run with mouthfuls to the nest. Occasionally my larvae will just stop feeding and remain still for months on end, then suddenly for no reason they start flicking their heads, then they start feeding again.

The larvae and adults have been inactive now for at least a month. I accidently overheated the nest last week and the ants moved out and into the arena taking their larvae with them. After i cooled down the nest they all moved back again, but all remain pretty dormant with the occasional ant comming out to feed on honey water but refusing just about anything else thats offered. I havent seen any new eggs for a while either which i think suggests a winter break even for this tropical species.