Acromyrmex sp. Too many princesses?

Acromyrmex sp. Too many princesses?

I've been keeping my Acromyrmex sp. colony for almost two years now, I would say that I have between 1000 and 2000 ants in this colony with a three 20x20x20 arenas including one full of fungus. For the past year, I've been having more and more princesses in this colony, so many that I think that 50% of this colony is now made of princesses. Many of them are now wingless and are doing worker stuff (cutting leafs and bringing them to the fungus arena). However I also have a very high number of princesses deaths. I do see workers dragging living princesses in the dump arena and most likely killing them there.

1. I can't see the queen anymore as the fungus is big, and I have like 300+ wingless princesses
2. I do not see any brood, but as the population is not getting lower, I think it must be hidden in the fungus
3. I think I have more princess birth than worker birth, which at some point will be detrimental for the colony I guess


Do you guys have any idea what this colony behavior mean? 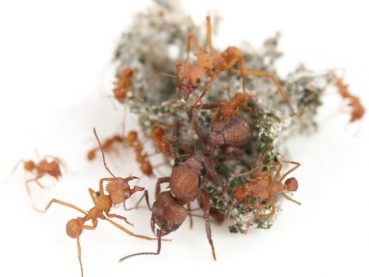